Here in snowy Montreal for a conference called “The Arts in A Digital World / Le Sommet Sur Les Arts a l’ère Numérique” organized by the Canada Council/Le Conseil des Arts du Canada. Should be some engaging bytes for the little grey cells. Arriving during a blizzard last night(!) puts some perspective on to the literal force of nature and that tech is no match for mother nature. It took almost 3 hours to get from the airport to the hotel, by hook and crook and I felt lucky the wind didn’t blow me away. This morning juggling my grande Americano (I guess Starbucks has long since invaded Montreal as well) I forgot that the elevator doesn’t go anywhere unless you wave your electronic card, reminding me how pervasive technology is. I live in a walk-up in Vancouver, and my studio is in a heritage building without a buzzer, so in some ways I’m living in the past.

Thus, here are some preliminary jetlagged thoughts. The first is:

What is Implied by the Digital in the Arts?

So as an artist who uses/employs many different digital arcs to get her thoughts out there, my primary use of digital is in and of itself. But having cast a cursory glance at the conference schedule, I can see, that there will be (as expected) sessions on the marketing angle of the digital world. How do use the digital to promote the thing itself.

But first a background story.

This past summer/fall I presented a temporary public art project in downtown Vancouver in the windows of the Canada Line. Called Pier D. It consisted of 3 photographs, 2 altered archival images from 1938 when on July 27th, 1938 there was a huge fire that destroyed Pier D, and a third image from the present day of where it used to be. I used a large QR code (with a background of water) to take visitors to a fictionalized story set in 1938, incorporating bits and pieces of “real” Vancouver history and also a story of a young woman who wanted to be a photographer.

The destination of QR code changed every day, taking you either to a blog post or to text that lived only on the QR code platform and vanished the next day. 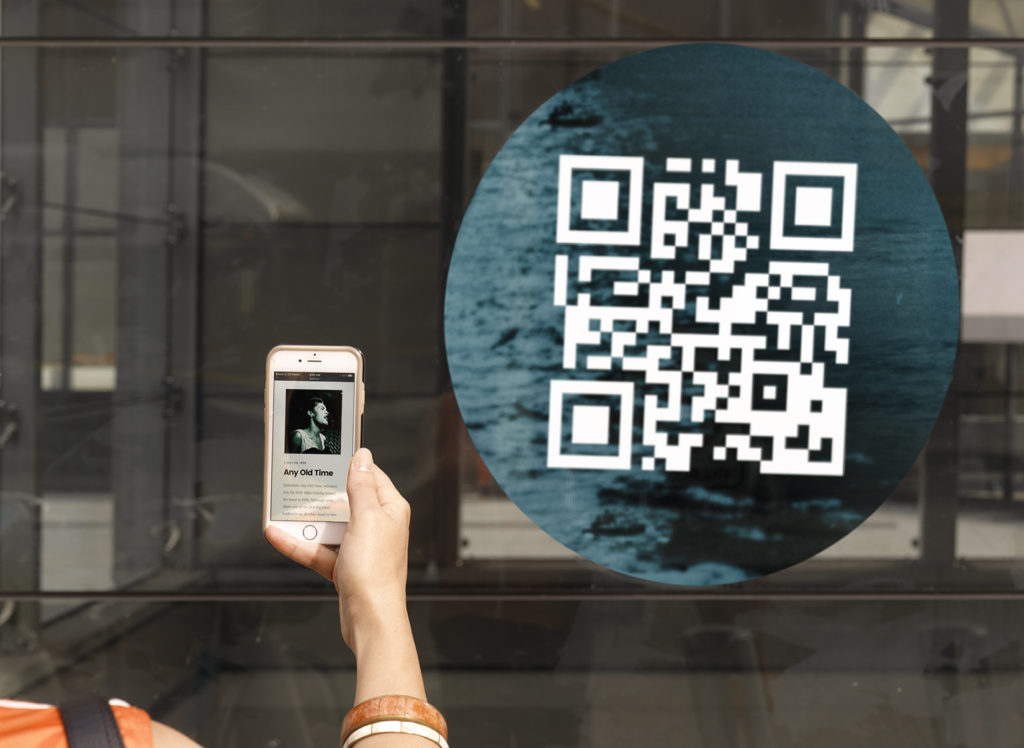 There were a few things I was playing with: one, that the (relatively) gigantic scale* of the QR code was a bit of a send-up to advertising’s use of such techniques, and the location is right beside the newly built retail mecca — Nordstroms; two that the ephemeral nature of the story (the bits that were “QR only” never make it to the blog) accentuate/exploit the possibilities of fragmented narrative in a distracted iPhone culture; and three that the QR code teeters on the brink of being obsolete (although coffee makers and some marketers would disagree) so it was a fun window to present a story set in 1938.

Fast-forward to sometime in early January, 2017. I was downtown waiting for the bus outside London Drugs, and looked across the street and thought I saw my QR code still installed! I said to Mr. OP – “I tot I saw a QR code”. He agreed that it looked like they had left a remnant there. I crossed the street and upon closer inspection, it was much different. Smaller. But with a similar water background,and also a circle.
The key difference is that for this public art project, by Laiwan, herself very well versed in digital technologies, the QR code is functioning as a portal to the website, which gives a description of the work. Essentially information – or – marketing.

I’m not dissing this move. I was a touch flattered, a touch perplexed. But I did find it fascinating.

So the intention here was to use the QR code in its more traditional marketing sense. Whereas my intention was to (hopefully) imbue the qualities of the fragility of such a code and explore its capabilites for a serial Sherlock Holmes style narrative (largely minus the murders, although there were some mysteries).

There are other ways in which this difference of intention self-presents, namely, of course in websites. Myself and many others have created “net art ” (hello late 20th century); twitter operas, Facebook apps, location-based apps. I might explore examples of these types of works in another post, for now, of course you already know that they exist.

And equally so, the promotion/marketing angle exists and, indeed “Should” (loathsome word) be taken advantage of by artists. It almost, I think, goes without saying that organizations are using social media, the interwebs and whatnot to their advantage. If not, go ahead and hire me:)

Looking forward to the conversation. Unless I get trapped in the elevator after because I get in with someone else, forget my card, and am forever stuck on floor 13.
Cheers